Employers are hiring again, but struggling to find workers

Some blame jobless benefits, but other factors also at play.

Chris New said he has turned down $250,000 in business because he just can’t hire enough laborers and drivers at his Carrollton-based company, Barnes Van Lines.

There are plenty of people without jobs, but unemployment benefits give them too much incentive not to work, he said. “We advertise and nobody comes in looking for a job. A lot of people are taking advantage of the system. It’s really killing us.”

After previous recessions, unemployed workers would pour off the sidelines to jostle for jobs. Not this time — at least not yet.

Expert say the reasons are complicated. Heightened federal unemployment benefits play a role. Many parents also need to be home with children and many fear a still-spreading virus that has killed more than 17,000 in Georgia. Many of the unemployed are from sectors not yet hiring or businesses that have not re-opened, and their skills don’t fit job openings.

But no doubt, there’s a discord between the estimated 400,000 Georgians receiving jobless benefits and the surge in job openings that are going unfilled. The state’s Department of Labor website listed 98,101 job openings in July compared with about 220,000 now.

With COVID-19 vaccinations rolling out, the economy is growing and companies are hiring, especially in tech. But it is proving hard to fill the modestly paid jobs that cannot be done at home.

Some employers are raising wages. Uber offers a $1,000 “sign-on” bonus to become a driver. Pilgrim’s Pride in Georgia touts bonuses up to $2,000 for jobs in poultry plants.

Barnes Van Lines wants to hire eight laborers at $14 an hour, as well as drivers: two for smaller trucks at $17 an hour and four for tractor-trailers at $25 an hour.

Currently, state jobless benefits top out at $365 a week while the federal government adds $300. That totes up to the equivalent of $16.63 an hour for a 40-hour week, which undermines hiring for all but the tractor-trailer positions, New said.

Mark Butler, Georgia’s labor commissioner, says most people receiving benefits were low-wage workers and they are making more now than when they were working.

“That’s tough to compete with,” he said. “Our big concern going forward is companies not finding enough people to staff up and provide services.”

Yet unemployment benefits are not the only difference, said Daniel Zhao, senior economist with Glassdoor, which offers job listings, ratings and research.

“Because this isn’t a normal crisis, there isn’t a normal reason for labor shortages,” he said. “A lot of workers are concerned about returning to the workplace or they have to take care of children or older family members.”

That pull toward home disproportionately affects women, especially with many children still learning remotely. The U.S. economy in March had 7.6 million fewer people employed than before the pandemic. But the percentage of mothers aged 25 to 54 who are working has fallen 4.5 percentage points, compared with 3.3 percentage points for the overall adult working population, according to Jed Kolko, chief economist of jobs site Indeed.

The weekly $300 federal unemployment supplement includes no health insurance and is not generous enough to replace income for better-paid employees. Moreover, federal subsidies are slated to expire in September.

Alicia Hornsby is a teacher whose school continued in-person learning. She quit last year to be home with her own children in Canton after they switched to remote learning. A divorced mother of two, Hornsby has burned through her savings and fallen months behind on her rent.

She applied for jobless benefits and has been waiting for months for that badly needed money. She is not alone — payments to thousands of unemployed Georgians have been delayed as the state’s labor department struggles to keep up with applications.

Hornsby said the linchpin in her job plans is if her children return to in-person classes. “I do plan to go back to work teaching, hopefully by next school year.”

Family can be an obstacle to work in other ways.

Marilyn Hatcher of Columbus has been a caregiver for her disabled, veteran father. During the pandemic she hasn’t looked for work, because she didn’t want a caretaker for her father to come into her home.

Now, with both of them vaccinated, she is hoping to qualify for a Veterans Administration program that will watch her father during the day. But she is still hesitant.

“I do not feel comfortable traveling and staying at hotels now, especially with the new variants of COVID and people who are still not taking the virus seriously,” Hatcher said. 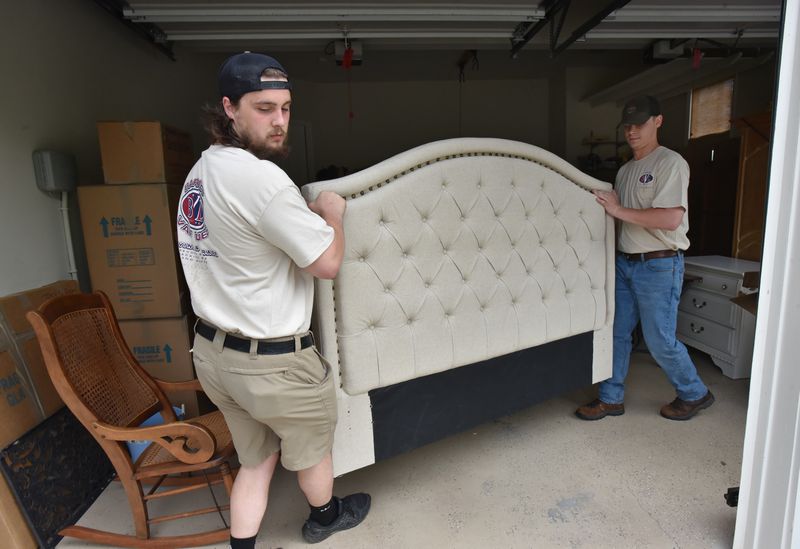 Georgia’s jobless rate fell to 4.5% in March from 4.8% in February after the economy added 21,800 jobs last month, state officials said Thursday. But the state processed 38,382 new jobless claims in the week ended April 10, up 4,759 from the previous week and far above pre-pandemic levels.

Fear of the virus has been a hurdle for Lisa Robinson of Rome.

Self-employed, she closed the office where she offered holistic health treatments, but can do just a fraction of the business online. Meanwhile, her carpenter husband was weakened by heart surgery and, while at risk, has not been working.

She’s thinking of leaving the labor force for good, applying for Social Security rather than risking in-person work, she said. “A lot of people here think it’s a joke and refuse to wear a mask.”

Optimistic expectations about the economy color the actions of those receiving unemployment benefits and ease any sense of urgency, according to Indeed’s Kolko. Job seekers now can be more confident about finding work in a few months than they would have been a year ago, he said.

One of the most obvious shortfalls in workers is in trucking and logistics, a crucial part of Georgia’s economy that has boomed because of e-commerce, said Sandy Lake, director of the Georgia Center of Innovation for Logistics, which works to help companies improve their networks.

“Anybody who can deliver a package is in demand,” she said. “Driver pay is going up.”

The supply of drivers perennially has been a problem, but lately it has fallen far short of what’s needed, said Sam Pollard, director of fleet operations for Syfan Transport.

The growing Gainesville company has been planning to add nine drivers this year to its current stable of 25 who haul manufactured goods all over the South and Midwest.

“I’ve never missed a number, but I don’t know if I can add nine,” he said. “I’ve been in this business 22 years and this has been the most difficult for hiring by far.”

The service sector, especially leisure and hospitality, represented the lion’s share of job losses during the pandemic.

Many restaurants furloughed most or all of their staffs when the pandemic forced them to shut down. With most restrictions lifted and many Georgians vaccinated, many are seeing business pick up.

But many say they are still short on workers.

“I need to do everything,” said Cam Vuong, owner of Canton House on Buford Highway. “Seven days a week and no ‘off.’”

An on-site restaurant at Mount Vernon Towers, a 300-unit condominium complex in Sandy Springs, also has been hard to staff, said Scott Carriere, a member of the condo board. The condofurloughed nearly half its 85-person staff at the start of the pandemic, but had trouble getting them back as restrictions loosened.

“They just don’t return phone calls,” Carriere said. “We call agencies and they say, ‘We can’t even find anybody we can send you.’”

Most of the jobs pay between $15 and $20 an hour, he said. The condo wants to hire five or six people for janitorial and maintenance positions and also needs a bus driver.

“We wind up paying more overtime for the staff that is doing the work. And some things just don’t get done,” he added.

Manufacturing also is scrambling for workers, especially among front-line positions.

Thomaston Mills in Thomaston has been trying to hire about 10 people for various positions, including mechanics and machine operators, but it’s been slow going, said co-owner Janet Wischnia.

“There are some people that are afraid of COVID, some who have children at home, but the majority of the issue is that workers are getting an extra $300 a week and do not want to go back to work at this time,” she said.

But they’ve also seen a change in attitudes.

Unemployment payments offer prospective workers a chance to be selective, she said. “People want to go back to work, but they want to work for a competitive salary.”

– Ligaya Figueras contributed to this report.