Running on Empty: There’s a Lot to Like about Hydrogen, If You Can Find It

Hydrogen is the most abundant element in the universe, but in California it can be maddeningly hard to find when you need it to fuel vehicles like the Toyota Mirai. 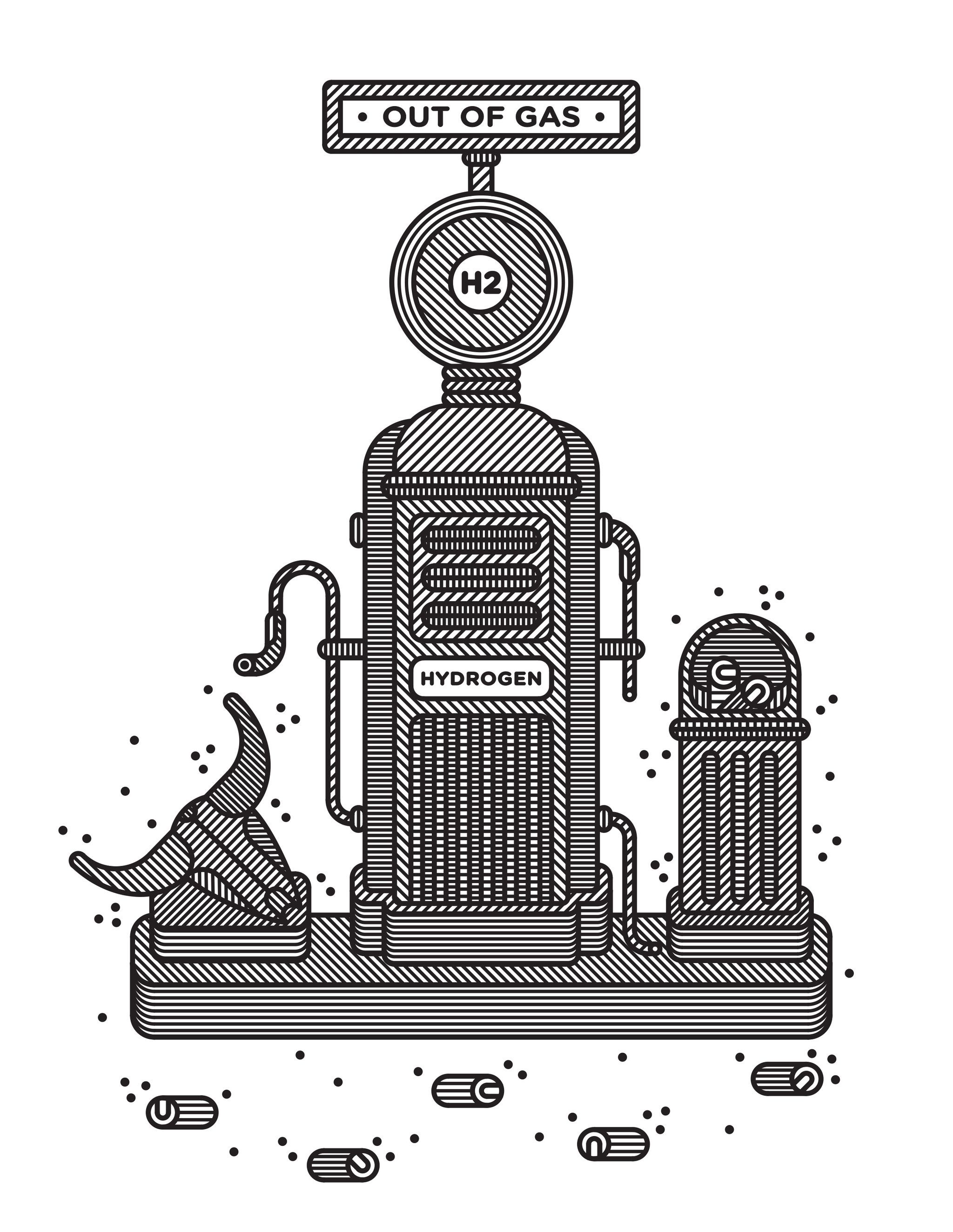 In April 2004, the city of San Francisco acquired two Honda FCX cars powered by hydrogen fuel cells. Mayor Gavin Newsom held a press conference, and to show off just how clean the vehicles’ emissions would be, he collected condensate from a tailpipe in a paper cup and took a sip. “You are looking, literally, at the future,” he said.

Last fall, Newsom, now California’s governor, signed an executive orderrequiring all new cars and light-duty trucks sold in the state to be zero-emission vehicles starting in 2035, his ambitions buoyed by a growing list of EVs and rising demand. If you want to go electric, the Golden State is a fine place to be. There are, according to the California Energy Commission (CEC), more than 70,000 public and shared private vehicle-charging plugs throughout the state. The Tesla Model 3 was the best­selling car in the state in the first quarter of 2020, a sign that Californians have an appetite for more environmentally friendly vehicles. That makes it a great test market for hydrogen cars, which are supposed to solve the range and charging headaches of today’s EVs by carrying more energy and refueling more quickly.

Still, even in California, hydrogen’s future is murky. In 2015, when Toyota debuted the Mirai hydrogen-fuel-cell-powered sedan in the United States, the automaker took to calling customers trailblazers. The trouble with blazing a trail, however, is that you don’t always know what you’re getting into. Deals and incentives abound, but if you’re driving any of the 9000-plus fuel-cell electric vehicles (FCEVs) that call California home, you better be good with logistics. In a state that covers more than 163,000 square miles, there are currently only 45 hydrogen stations, and they don’t always have enough fuel for everyone who needs it.

Nearly 17 years after Newsom took a sip of tomorrow, FCEV customers are finding it difficult to fill up and almost impossible to offload their cars when reality sets in. “The excitement of being a trailblazer rubbed off long ago,” says Patrick Perez, a Mirai driver in the Los Angeles area. On Facebook, a Mirai group that Perez is part of whiplashes between ecstatic and despondent. Some members extol the almost holy virtues of driving an emissions-free vehicle and saving the earth; others count the minutes until their Mirai leases end. “The car does what it’s supposed to,” Perez says. “It’s just the hydrogen infrastructure that is causing the issues.”

By far the most pressing problem is fuel availability, as FCEV owners can’t count on stations to actually have hydrogen. To mitigate the issue, Mirai owner Doug Dumitru started H2-CA.com, a website where people can easily “tell whether a station is likely to have hydrogen when they get there,” he says. The site, which pulls info from the California Fuel Cell Partnershipevery 60 seconds, gets around 2000 visits per day when hydrogen is scarce.

NEVER SEEN A MIRAI IN THE WILD? THERE’S A REASON FOR THAT. TOYOTA HAS SOLD FEWER THAN 7000 OF THEM IN THE UNITED STATES SINCE THE CAR DEBUTED IN 2015. LAST YEAR WAS THE WORST FULL YEAR FOR SALES, AT 499 VEHICLES, 73 PERCENT BELOW THE HIGH SET IN 2017.

This problem began in June 2019, when a hydrogen production facility in Santa Clara caught fire, disrupting supply in the Bay Area and Southern California. More recently, the big freeze in Texas, where much hydrogen comes from, left many California stations bereft. FirstElement has 23 of them on the West Coast. With road closures keeping trucks in Texas, on the morning of February 23, only six of its stations showed more than 25 percent capacity, which likely dwindled as hydrogen-starved vehicles descended on them.

The fuel is pricey too: A report from the California Air Resources Board and the CEC showed that in 2019, the average price per kilogram of hydrogen was $16.51. According to the few stations we called, the rate hasn’t changed much. To put that in perspective, consider the base-model Hyundai Nexo. It can hold 6.3 kilograms of hydrogen and, by the EPA’s methodology, sees 60 miles per kilogram. That means a Nexo owner can go about 380 miles before needing to refill the tank, which costs about $100.

Given that a Hyundai Tucson (which starts at $24,885) will go even farther for less than half as much, you may wonder why anyone would opt for an FCEV. But the majority of fuel-cell owners don’t pay for gas, with Toyota, Honda, and Hyundai all handing out a $15,000 fuel card good for 36 months with each purchase or lease. 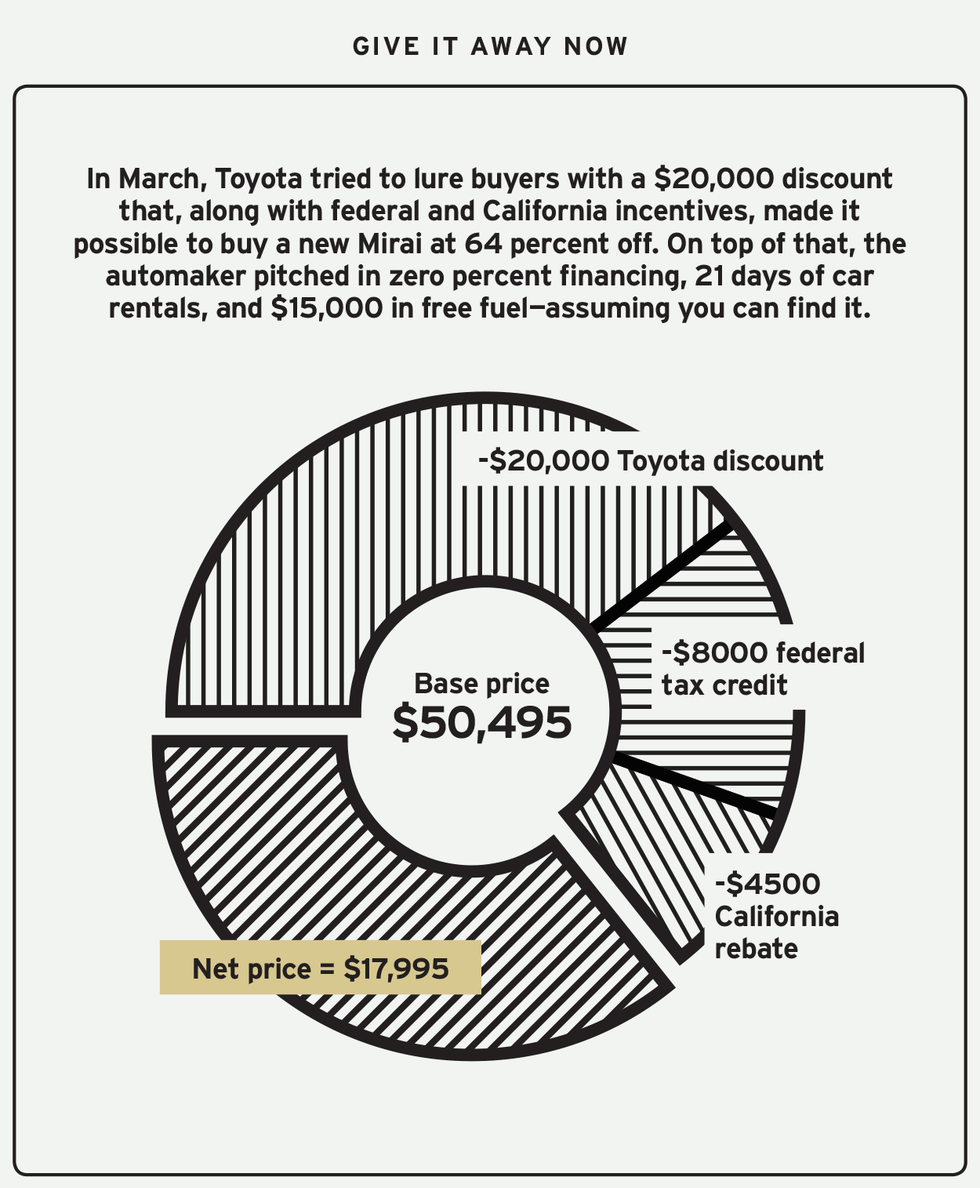 That’s just one of the things manufacturers are doing to attract buyers. With its $60,120 Nexo, Hyundai is also throwing in maintenance for three years or 36,000 miles, a 10-year/100,000-mile warranty on the battery, and a free rental car one week per year, in case you actually need to go somewhere outside a hydrogen-filling-station area or you just feel like polluting a little. On top of that, FCEV buyers can drive solo in HOV lanes, receive $4500 (or $7000 if they’re in a low-income bracket) from the California Clean Vehicle Rebate Project, and take advantage of a federal tax credit of up to $8000. But given the scarcity of fuel, prudent shoppers will base their decision to purchase an FCEV on whether they live in the vicinity of multiple reliable filling stations, which pretty much limits them to L.A. or the Bay Area. However, not everyone thinks about that before signing the paperwork.

That’s where Kirk Nason made his mistake. In 2018, the retired Microsoft engineer took delivery of a Mirai for his daughter, whose commute took her up and down Interstate 605. There aren’t any hydrogen stations off that regularly congested freeway, but several were due to open; until they did, Nason figured she could refill the Mirai somewhere nearby. At least once she had to have it towed after running out of fuel while looking for more. There are no battery jumps, no five-gallon gas cans delivered by AAA. When you’re out, you’re out.

It became too much, Nason says, and his daughter bought a gasoline-powered SUV. Her Mirai took up residence in his garage, awaiting the end of its $543-per-month lease in June so he can return it to Toyota. “I can’t wait to get out of this nightmare,” Nason says. He has tried to give it back early, and neither Toyota nor his dealership is interested.

That’s not surprising. A used Mirai is abominably cheap—a car that was close to $60,000 new in 2018 (the 2021 starts at $50,495) now sells for maybe $15,000, with plenty available for less. We found a decent 2017 Mirai for $8500. Certified Pre-Owned cars at Toyota dealerships cost a little more, but there’s a reason: Buy one and you’ll get that $15,000 fuel card. If you have a Mirai and try to sell it on your own, that’s what you are up against. Even if you have money and time left on your fuel card, too bad. “It is not transferable, so any unused portion would not go to a new owner,” says Paul Hogard, a Toyota senior analyst.

Hogard acknowledges the hydrogen shortage in California, saying that Toyota is monitoring the situation but doesn’t make or distribute the fuel. He says the company is working on “a case-by-case basis” to keep customers “mobile” while also trying to improve infrastructure.

Jack Brouwer, a professor of mechanical and aerospace engineering and associate director of the National Fuel Cell Research Center at the University of California, Irvine, says it’s “very unfortunate that the infrastructure has not been sufficient for quite a few people” who drive hydrogen-powered vehicles. Certainly, he says, it hasn’t grown as quickly as EV-charging infrastructure, with “many more millions spent” on those stations. In December, California pledged $115 million to add up to 111 more hydrogen-fueling stations by 2027. “I’d suggest it’s too slow, but it is coming along,” Brouwer says.

At present, Brouwer gives the nod to plug-in electric vehicles, citing the scope of the recharging infrastructure and improvements in battery technology. But he submits that any hydrocarbon-free future must include hydrogen. One reason: It works much better than battery power for heavy-duty vehicles because hydrogen’s energy density is much higher than a battery’s, plus refueling is significantly quicker than charging a battery. Brouwer is also looking ahead to the day when California is saturated with zero-pollution vehicles. Imagine, he says, a high-rise where almost every resident has an EV; charging would have to be extended to each parking space, and the electrical grid would have to be retooled to handle the drain.

“But if there were a hydrogen station on the corner,” he says, it could substantially reduce area electrical consumption and the need to dramatically update electrical infrastructure. Brouwer predicts that one way or another, the future of the auto industry will include far more FCEVs than are currently on California roads (or sitting in California garages). But for now, he drives a Tesla.